A Few Days in the Life of a Guide 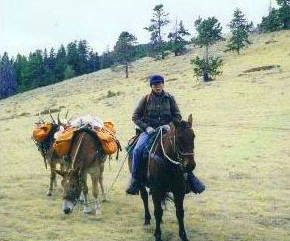 In July of 1999, I attended the Royal Tine Guide School. After finishing school, it only took about a week to find a job. My goal was to work for an outfitter that used horses and mules in the backcountry. I was given an interview by an outfitter out of Belgrade, Montana. He showed me around his ranch, told me about his expectations, and took my resume’ which Cody had helped me put together. He said he needed to check my references and would call me back in a couple of days. The next day he called back and offered me the job.

The first three to four weeks were spent setting up camps and trying to learn their system. Just as Cody had said during school, each outfitter has his own variations on doing things so I had much to learn.

Setting up camps was hard work. We cut and hauled poles for tents, set up tents, dug post holes and built corrals. Work days were ten to fourteen hours long. With only a few days off in which to do laundry and prepare for the next trip.

In September, we started the early rifle season in the Absoroka Beartooth (known as the A.B.) north of Yellowstone Park. Guests on these hunts came in through Yellowstone, however, hay and guns cannot go through the park and meat cannot go out, so the packers had to take a different route.

It was my job during the first hunt to ride to camp, pulling five or six mules, over Boulder Pass at 9600 ft. to get rifles and hay into camp. Then, I would turn around and ride back. The round trip was twenty-four miles and took eight to nine hours if all went well. The days started at four a.m. with wrangling, saddling and breakfast. It ended around six p.m. when I got back to camp, unloaded the hay, unsaddled and tended stock. Eight hours in the saddle was common.

The A.B. is one of the most beautiful areas I have ever seen. Most of the area we hunted was over 8000 feet. Every predator in the lower forty eight lives there along with elk, deer, moose, mountain goats and bighorn sheep.

Soon I was guiding. Hunting days started at two or three in the morning. We wrangled, saddled and ate breakfast. After breakfast we got the hunters ready and mounted up for a two or three hour ride in the dark to get to our hunting areas. Some days I took a mule in case we needed to pack out an elk. On other days we took saddle panniers that we could hang over our riding saddles if we got something. Most mornings went well outside of my horse stepping off the trail a couple of times.

Hunting was tough. Almost every morning, we heard wolves. On the first day of the second hunt, one of my hunters killed a nice six by six bull elk. I had posted him on a good meadow and I was about five hundred yards away with my other hunter in a different meadow when I heard him shoot. We worked our way toward him. At fifty yards, I could see antlers sticking out of the snow and a very happy hunter. I think I was more excited than he was. My hunter told me he a video taped the bull walking out into the meadow. He then put his camera down and shot the bull. Pretty calm for his first day of his first elk hunt.

After handshakes, congratulations, and pictures, I went to work. The outfitter I worked for has us quarter the animal then put the meat into grain bags and load the bags in panniers. I was just getting ready to load it onto the horses when one of the other guides showed up with a mule. We loaded the elk up and headed back to camp. It was the first elk of the season, so celebrations were in order at camp that night. Camp tradition dictates that on an evening of a kill, we eat the tenderloins and Rocky Mountain oysters. What a meal!

The A.B. is major grizzly country. We had been seeing tracks almost every day. We were instructed to head back to camp before dark because killing a bull late in the day might mean giving it up to the bears. Local wisdom and experience says that grizzlies come to gun shots because they have learned a gut pile can usually be found. For these reasons, we did not hunt in areas where we had fired shots the previous day, even though elk may still be in the area.

Two days later we were back at the same pass. The gut pile was moved down the hill, but we could still see it from where we sat to watch the meadow. Ravens were busy working it over. All of a sudden, they all took off. I knew something was coming and, sure enough, a sow grizzly with three cubs appeared out of the trees. What an awesome sight! You realize immediately that you are not at the top of the food chain. The cubs went right to feeding but the sow was more cautious. I had been hoping to see a grizzly and it is an experience I will never forget. After forty five minutes the bears left. Their speed and power and is legendary and their presence captivating. Seeing them in the wild is something words cannot describe.

We decided to stay at the pass since elk often cross during the day. The bears had been gone about half an hour when I heard wolves howl off to the east. Shortly after that, I saw a mule deer doe run across the pass. Within minutes we noticed movement in the trees to the east and wolves began to appear. They came in groups of twos and threes until there were a total of sixteen. Most were dark in color and the others were grays. A few went to the gut pile. The rest kept their distance either standing or lying down. We watched for over an hour until they began to drift away in twos and threes and were gone. WHAT A DAY!! No elk, but my hunter was more excited about the wolves and bears than if he had killed an elk.

Two days later we watched a sow grizzly and two cubs. These bears came to within about one hundred fifty yards of us. They were headed toward where our horses were tied. Things were a little tense for a few minutes then they wandered off.

I spent general season in the Madison Range in October and November. The weather was colder with some snow. Hunting trips were eight days, one day to ride in, six days to hunt, and one day to ride out. Hunting was not easy because of a lack of significant snow. I ended up getting another bull elk and a mule deer buck for a couple of my other hunters. All in all, it was a great experience and I can’t wait ’til next season. The work is hard; long days, heavy lifting and long rides. I lost forty pounds and ended up in great shape.

The skills I learned at Royal Tine were invaluable, but I still have much to learn. Cody and John worked us hard at school. They did an outstanding job trying to prepare students for what they are getting into. I was fortunate to get on with an outfitter who has excellent stock and years of experience. I could not have done it without the knowledge I gained at Royal Tine. Each outfitter has a different way of doing things. This is not a job for “hot shots”. You will be responsible for the lives of people and valuable stock. You have to stay alert and pay attention. You must anticipate problems and solve them by yourself. If you are willing to work hard and keep an open mind, you can make a go of it in this business. Royal Tine is a good place to start.